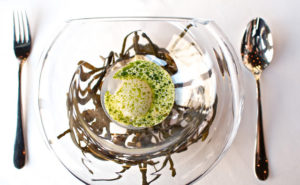 The tradition of this restaurant, which has become the best in Denmark, is to offer guests to go to the kitchen to look at the cooking process and greet the chef. Few people miss this opportunity, because we are talking about a real star of world cooking – Rasmus Kofoed. The 41-year-old Dane three times became the winner of the prestigious international culinary competition Bocuse d’Or in France, worked in the best restaurants in Brussels and Copenhagen, and then opened his own institution. True, in 2009 it went bankrupt, and Kofoed had to look for a new business partner and a new building. But it was here that he was waiting for a resounding success.

The design of the institution is sustained in the restrained Scandinavian tradition: a minimum of decorations, black and white gamma, large windows overlooking the park. The same minimalist cooks stick to the kitchen.

The full tasting menu consists of 20 dishes and costs $ 190, for the menu with specially selected wine for each dish you need to pay from $ 145 to $ 220. Among other things, you can find caramel carrots with sea buckthorn, cheese with wild garlic sprouts and sea salt, mushroom foam, artichoke wood with walnut oil, venison with beets, berries and herbs, as well as black bonbon on the menu. currants with licorice for dessert.

You can reserve a table on the official website of the institution, although there are no empty seats for the next three months.

The name of the restaurant is translated as “Mother Nature”, and the concept of the institution fully corresponds to it. According to the chef, Maaemo displays the severity of the climate and the wild nature of Norway. The institution is located near the bus station, it is not in the center of Oslo. Minimalism in the design is brought to Spartanism: the only decorations are white tablecloths on the tables and the view of the bridge from the windows. In the kitchen, they use only Norwegian products, and, moreover, they are exceptionally environmentally friendly.

Chef Esben Holmbo-Bang, 32, originally from Denmark. He loves to cook traditional dishes, but each time he rethinks them in his own way. He admits that Norwegian cuisine requires a lot of imagination, because the main national dish of this harsh country has always been potatoes with meat. But judging by the menu, Esben doesn’t have to occupy creativity.

His signature dish is Norwegian lobster with fir sauce. The tasting menu also includes oyster emulsion with clams and parsley sauce, a salad of bitter herbs, yogurt and garlic mustard, lightly salted mackerel in apple-butter sauce, asparagus with edible flowers, glazed beets in currants and chamomile with dried reindeer heart. For dessert they serve black currant sorbet, goat cheese tart and frozen sea buckthorn cheese. The tasting menu at the restaurant costs $ 265, and you need to pay another $ 160 for the selected wine for each dish.