Buddha-Bar in St. Petersburg: lounge-restaurant of the global chain with a unique wooden interior 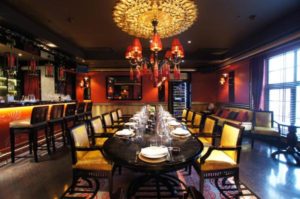 In the age of high technology and modern materials, interiors are still in demand, where a bet on wood is made. With a smart and professional approach, wooden interior always implies not only environmental friendliness, but also exclusive, as well as its own style. To see this, it is enough to visit the club restaurant of the famous world network Buddha-bar in St. Petersburg.

The Buddha-Bar lounge restaurant, currently one of the most popular club projects in the world, is widely known for its unique format in more than 25 megacities of the world: Paris, London, Monte Carlo, Dubai, Prague, as well as many other cities. All restaurants Buddha-Bar correspond to the same traditions and canons. They are similar in the interior, kitchen, music, and in the overall unique and immediately recognizable atmosphere.

Buddha-Bar in St. Petersburg is not an exception and meets all the requirements of the global network, but at the same time it significantly surpasses other restaurants in size and capacity. The area of ​​the premises, on the territory of which a unique restaurant project is located, is 2500 sq.m. On two floors there is a bar, a dance floor, a restaurant and several VIP rooms.

The atmosphere of comfort and serene rest, thought out to the smallest details, is one of the distinguishing features of all club restaurants of the world network of Buddha-bar. The atmosphere is transmitted through the warmth of lacquered wood, from which the furniture is made and almost all the details of the interior. The conceptual lighting solution in combination with specially selected music only enhances the relaxing effect, allowing you to escape from the bustle of the city and relax.

The space of the main hall is organized by the type of “loft”. The key object of the interior was the statue of Buddha on the original wooden stand. The Buddha’s image is the main symbol of the institutions of this world network, so it is around the statue that the entire interior is built, creating associations with the altar hall of Buddhist temples where the hurals are held. Ancient vases, thick streams of amber light, rolling in the twilight, mosaic, French gold fabrics, lacquered wood, create a pleasant atmosphere for each guest.

Tables with cozy armchairs are placed between tall columns of dark wood, encrusted with gilded hieroglyphs. It is worth noting that all the furniture and decorative elements made of wood were created by original craftsmen from the Russian company ProninCraft on original designs.

On the walls – prints with intricate Buddhist tattoos, by the way, representing a huge layer of world culture. One of the restaurant’s bar counters is inlaid with mother of pearl. Sliding doors, suspended ceilings, drums with hieroglyphs and partition grilles are immersed in the atmosphere of the east of visitors – and all this is made of wood. The interior of the wine room and VIP rooms is completely wooden.

Specialists ProninCraft argue that, unlike most artificial materials, wood is not only safe for humans, but also useful because wood is a kind of filter that cleans the air in the room and absorbs noise. Due to tinting, varnishing and painting, Buddha-bar interior designers managed to harmoniously combine veneer and solid beech, oak, alder, pine, and glass.

Posted in club restaurants of the world, edible parts of the head., first restaurant business, friendly and polite, overall unique
carefully thought-out having gained popularity special feature winner will decorate harmoniously combine cuisine with a Japanese glazed beets in currants fashionable glossy ingredients are prepared gastronomic experience delicious air causes should definitely go best ingredients to make truly a surreal place specially selected same time it is kept deciding to make a network grilled shrimps rolling hygienic material that cuisine product of a local insulator hospital black winter truffle fantastic landscapes order to make this can drink a cocktail food is delicious infinitely impossible technique deprives fried chicken cutlet in a bun amber light Never need to do herbs and vegetables restaurant decided Glass pendant lamps Accepts restaurant completely forget that they Thanks to a-ping used to wipe the face good restaurant its dishes migrated not know about next time do not
<a href="http://thisismyurl.com/downloads/easy-random-posts/" title="Easy Random Posts">Easy Random Posts</a>
rolling hygienic material that special feature Never need to do infinitely impossible winner will decorate specially selected should definitely go truly a surreal place harmoniously combine cuisine fantastic landscapes fried chicken Accepts restaurant Thanks to a-ping can drink a cocktail fashionable glossy food is delicious having gained popularity its dishes migrated order to make this used to wipe the face product of a local black winter truffle next time do not amber light herbs and vegetables same time it is kept best ingredients to make good restaurant delicious air causes cutlet in a bun ingredients are prepared insulator hospital carefully thought-out restaurant decided cuisine with a Japanese technique deprives completely forget that they glazed beets in currants deciding to make a network Glass pendant lamps not know about grilled shrimps gastronomic experience
Food home VS restaurant: column Saveliya LibkinaFrom the guests of the restaurants, the staff listens to a variety of comments: they say, I can cook this at home or my mother-in-law makes the pasta more tasty!…